This article is part of the series "Compiling Ruby," in which I'm documenting my journey of building an ahead-of-time (AOT) compiler for DragonRuby, which is based on mruby and heavily utilizes MLIR infrastructure.

Here is what you can expect from the series:

Note: the list of TBD articles may change as I may want to split some parts into smaller chunks.

With the (hopefully) convincing motivation out of the way, we can get to the technical details.

As mentioned in the motivation, I want to build an ahead-of-time compiler for Ruby. I want it to be compatible with the existing Ruby implementation to fit it naturally into the existing system.

So the first question I had to answer is - how do I even do it?

The execution model of compiled and interpreted languages is slightly different:

Let’s take a high-level schematic view of a typical compiler and interpreter.

The compiler is a straightforward one-way process: the source code is parsed, then the machine code is generated, and the executable is produced. The executable also depends on a runtime. The runtime can be either embedded into the executable or be an external entity, but usually both.

The interpreter is more complex in this regard. It contains everything in one place: parser, runtime, and a virtual machine. Also, note the two-way arrows Parser <-> VM and Runtime <-> VM. The reason is that Ruby is a dynamic language. During the regular program execution, a program can read more code from the disk or network and execute it, thus the interconnection between these components.

Arguably, the triple VM + Parser + Runtime can be called “a runtime,” but I prefer to have some separation of concerns. Here is where I draw the boundaries:

Side note: an alternative approach is to build a JIT compiler and embed the whole compiler into the executable, but it adds more complexity than I am ready to deal with.

In the end, the solution is simpler - the compiler and the final executable include the whole interpreter. So the final “compiling interpreter” (or “interpreting compiler”) looks like this: 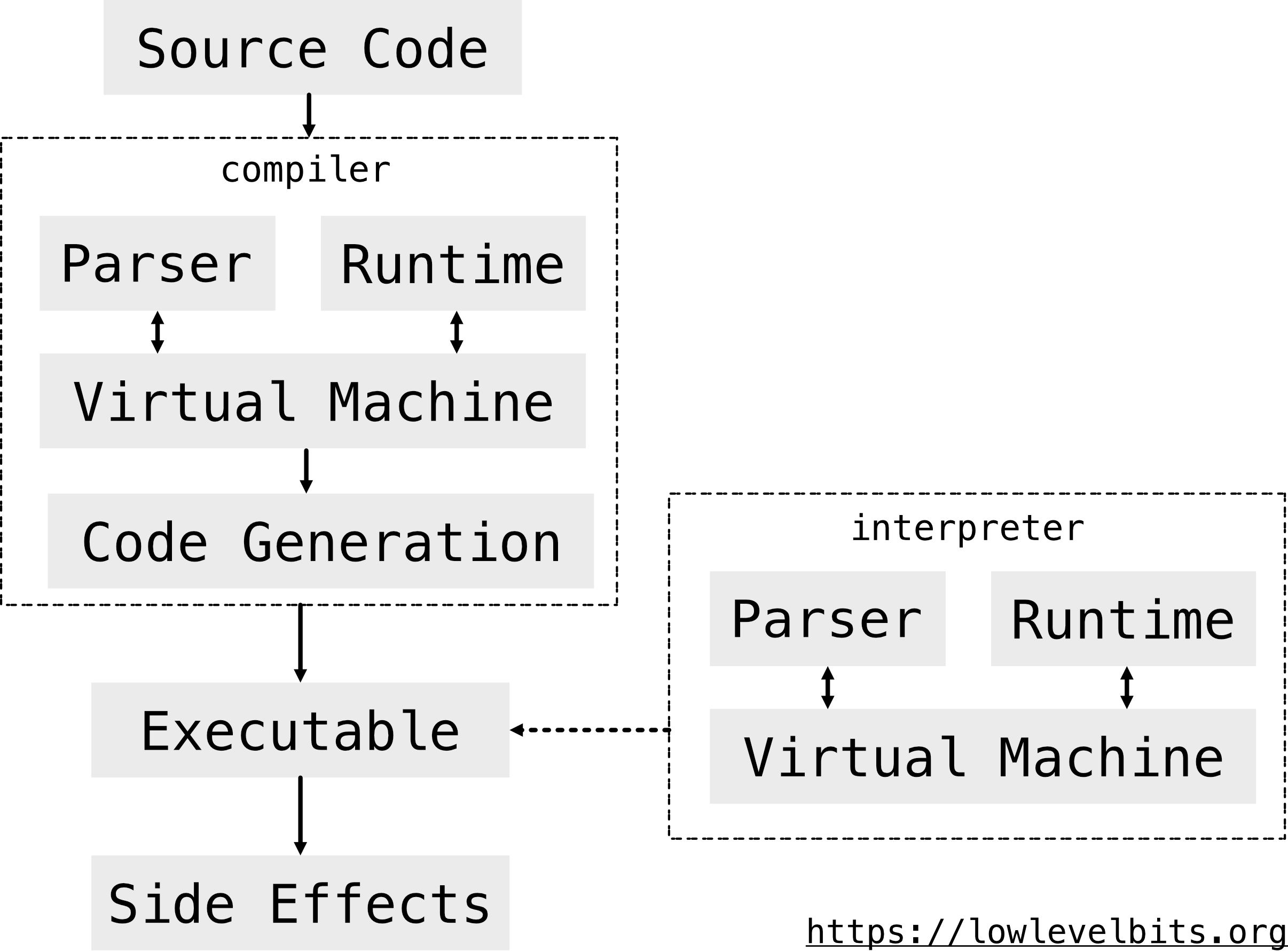 Ruby and its many Virtual Machines

The most widely used Ruby implementation is CRuby, also known as MRI (as in “Matz’ Ruby Interpreter”). It is an interpreter built on top of a custom virtual machine (YARV).

Another widely used implementation is mruby (so-called “embedded” Ruby). It is also an interpreter and built on top of another custom VM (RiteVM).

YARV and RiteVM are rather lightweight virtual machines. Unlike full-fledged system or process-level VMs (e.g., VirtualBox, JVM, CLR, etc.), they only provide a “computational device” - there is no resource control, sandboxing, etc.

The “computational device” executes certain operations on certain data. The operations are encoded in the form of a “bytecode.” And the data is stored on a “virtual stack”. Though, the stack is accessed differently.

To illustrate the bytecode and the difference between YARV and RiteVM, consider the following artificial examples.

The stack-based version uses the stack implicitly, while another version specifies the storage explicitly.

Let’s “run” both examples to see them in action. 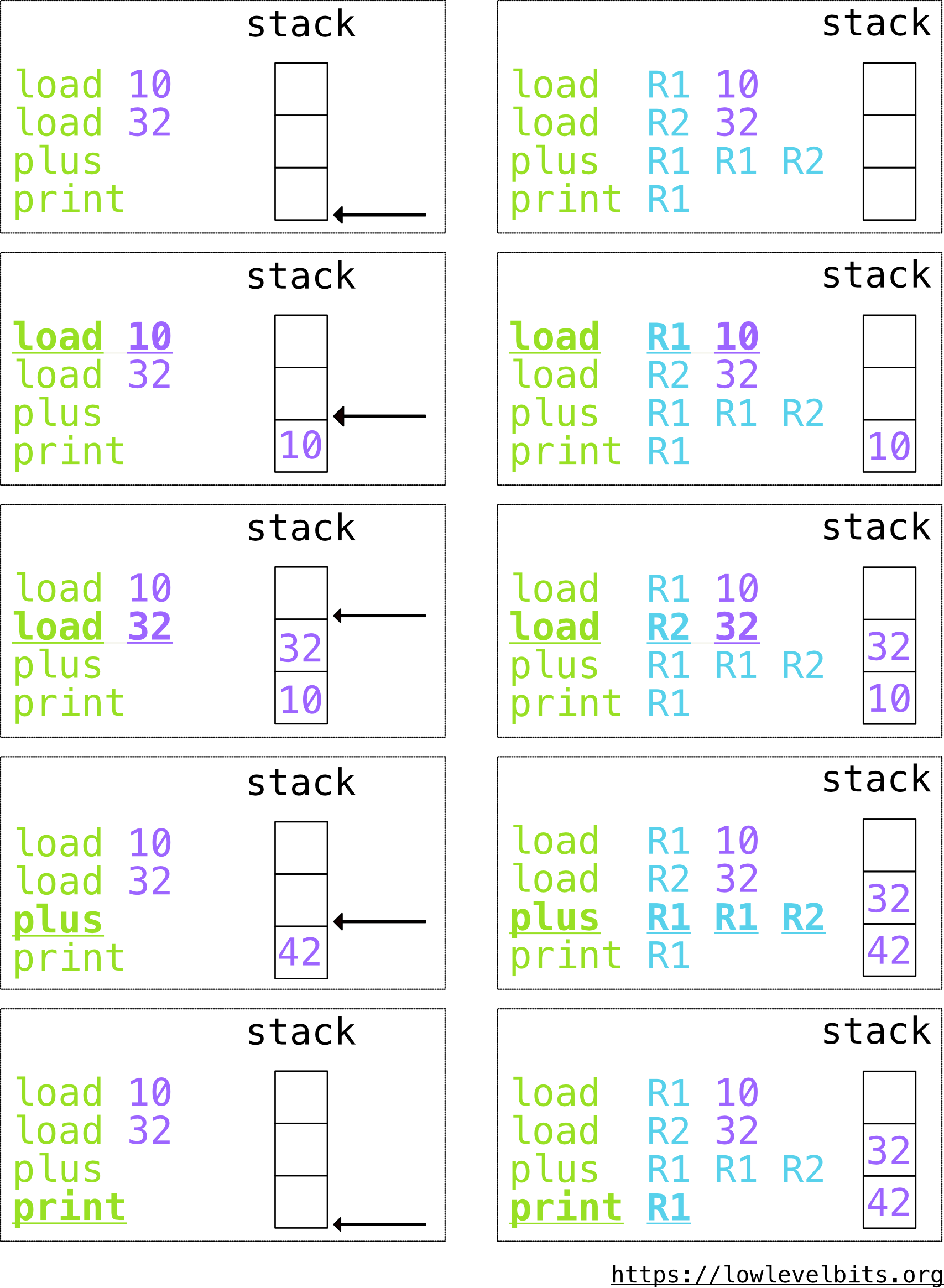 At every step, the VM does something according to the currently running instruction/opcode (underscored lines) and updates the virtual stack.

Stack-based VM only reads/writes data from/to the place where an arrow points to - this is the top of the virtual stack.

Register-based VM does the same but has random access to the virtual stack.

While the underlying machinery is very similar, there are good reasons for picking one or the other form of a VM. Yet, these reasons are out of the scope of this series. Please, consult elsewhere if you want to learn more. The topic of VMs is huge but fascinating.

Let’s consider how the VM works and deals with the bytecode. YARV and RiteVM use the so-called “dispatch loop,” which is effectively a for-loop + a huge switch-statement. Typical pseudocode looks like this:

And then, the bodies for the actual opcodes may look as follows. Stack-based VM:

And the register-based version for completeness:

In this case, if we know the values behind pool[0] and the actual values of md.regN, then we compile the example program to something like this:

and avoid the whole dispatch loop, but I digress :)

In the following article, we look into mruby’s implementation and virtual machine in more detail - Compiling Ruby. Part 2: RiteVM.